Breakfast with the Arts: William Ransom 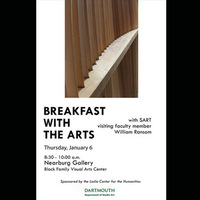 William Ransom received an MFA in Sculpture from Claremont Graduate University in 2008 and a BA in Sculpture and Architecture from Bennington College in 2004. His work has been included in exhibitions at Arena 1 Gallery, the Torrance Art Museum, Greene Exhibitions and Fellows of Contemporary Art in Los Angeles, Ogilvy and Mather in New York, Open End Gallery in Chicago, the Albany International Airport and at the Franconia Sculpture Park in Minnesota among others. He has had solo exhibitions at Chime and Co. in Los Angeles, the Lenzner Family Gallery at Pitzer College, John Davis Gallery in Hudson, New York and most recently at the Staniar Gallery at Washington and Lee University.

William Ransom was born and raised on a dairy farm in Vermont and his work and life continue to be informed by his early material experiences and engagement with the cycles and rhythms of the natural world. Balance has always played an important role in his life and work; as the son of a bi-racial union, balance between black and white; as a farm kid living in the city, balance between rural and urban, city and soil; as a diabetic, balance between a sweet tooth and insulin injections. Ransom's work often reflects this sense of balance, suggesting flux, movement, things in a state of becoming or diminishing; a transitory provisional state, rife with an inherent unease and uncertainty. The forces brought to bear on the material pull into sharp focus the tensions and underlying instabilities and stresses of our world's current state and the ever-present potential for flare-up or collapse.

After a decade in Los Angeles he has returned with his family to Vermont where he now lives and works.

(Due to masking policies, we are unable to provide refreshments for this event.)

Sponsored by the Leslie Center for the Humanities

Events are free and open to the public unless otherwise noted.